In 2008 we moved the challenge location from the KG community space to the Creative Industries Precincts and the block with a wonderful big space, nice kitchen and even a sleeping space. We were amazed when 14 teams registered. Our 2007 winners – SIF90 – returned, as did Lurker’s Craft and Team Echidna. They were joined by Duct Tape, Preemptive Revenge, Pseudorandom, Laserback Turtles β, Team Friction, Black Wolf, Portal Marmosets, Distortion Studios and an adhoc group called Team Play – some of whom actually only met at the competition and one of whom was grabbed in a lift …

We had two satellite teams streaming in from AIE Canberra: Undomesticated Equines and TBA

Souri from tsumea gave us the words: Watermelon, Astronaut and Summertime

Mick Doble and Australian Gamer made a rather wonderful video of the event:

Much of the media from the event is lost in the mists of time, Australian Gamer did a three day live report  – you can find it via the wayback machine (sadly most of the photos are gone):

Triple J hack interviewed us. SIF90 (our 2007 winners) won again with the rather wonderful Melonauts. Their competion page is still alive here

The 2008 challenge saw more 48hr rituals and tropes established. A fascination about what happened in the kitchen during the challenge was confirmed, our noble 48hr ‘techie’, the magnificent Chen took on the role and has been doing it ever since, the habit of taking photos of people asleep at their desks was firmly established. We also started live streaming the event and collecting space-based data on the teams. This was the year that made us introduce the ‘pass out’ system – mainly because our winning team managed to start the challenge, go out to dinner and party and still get back to make a wonderful winning game (they made us start a pro-league the following year so we couldn’t record their empty table). 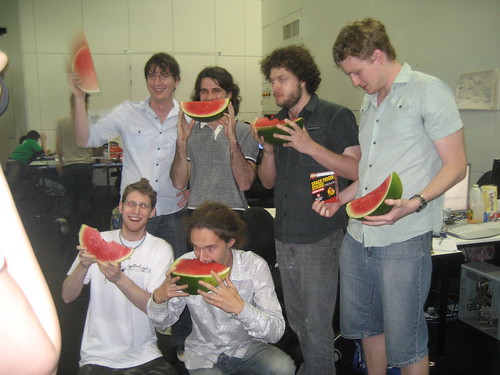